All dressed up and nowhere to play: accessories for your guitar

Posted on September 7, 2011 by jamiebobamie

All right, you’ve got that brand new shiny guitar, now what? When you buy a new dress, you need pearls and matching shoes. Hmm, bad analogy for some of you but you get the picture. Having a guitar is not enough. You need the stuff that goes with it.

Unless you play classical, flamenco, or some folk, you’ll want some flat picks.

If you’re a beginner and aren’t sure what kind to get, just purchase a selection. They’re inexpensive and easy to lose so it’s best to have extras anyway. As a rule thinner picks are best for strumming and thicker ones for single note lines but your mileage may vary. If you sweat a lot a pick with a grip on one end might be best. (One that isn’t smooth all over.)

If you’re a fingerpicker you may want to explore fingerpicks. Some folks play with just a thumb pick. Others want a pick for three fingers and the thumb. (I don’t know anyone who picks with their little finger.) Plastic ones are less noisy than metal ones. Generally metal ones are used for banjos and resonator guitars but I’ve seen regular guitar players use them too. These are plastic: 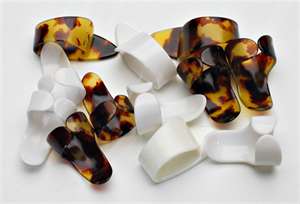 Don’t let some kid at a music store convince you that a plastic fingerpick doesn’t need to really fit, that you can boil them and reshape them. If I’m paying a buck for a little pick I’m not going to the trouble of heating it up, snatching it up while it’s still steaming then trying to mold it to my finger. I want a pick that fits. If you have smaller hands like mine it may take you a while to find the right picks but it’s totally worth it.

Lots of people fingerpick with the pads of their fingers or with their fingernails so you may not need those kinds of picks at all.

It’s a good idea to always have an extra set in your guitar case. Make sure you get a set that’s specifically for electric or acoustic. Any name brand will work, just try them and see which ones you like. Generally bronze wound will give you a brighter sound. Coated strings will last longer but they aren’t as bright. And no, I’m not talking about IQ although I’ve seen some strings do pretty complicated physics problems. Great if you’re a jazz player.

If you have a classical style guitar, get nylon strings. Don’t put steel strings on a guitar made for nylon! The guitar cops will give you multiple tickets, then you have to go to guitar court. It’ll also mess up your guitar. 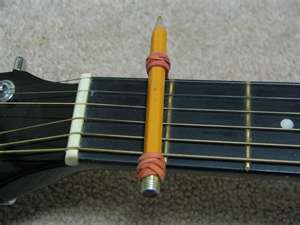 This is the bar that you clap across the guitar neck to change the key of a song. My piano playing friends are totally jealous of this little thing ‘cause you don’t have to know a load of music theory to change the key. Just put the capo on your neck, adjust it so the strings don’t buzz, then play the same chord shapes you were playing before. Voila! Instant higher key.

I like Kyser capos because you can put them on with one hand. They last a long time too.

Back when I learned to play we banged on the nearest rock and tuned to that. Some stegosaurus bones were a perfect E but you could only find them in Europe. Later on, I used a tuning fork. You hit it on something hard and it gives you a certain note. Most guitar players use an A although an E will work too. I still carry one in case my tuner bites the dust.

Most likely, though, you’ll want a tuner that clamps on the headstock. They run 15 or 20 dollars and are much easier to use than a stegosaurus bone. 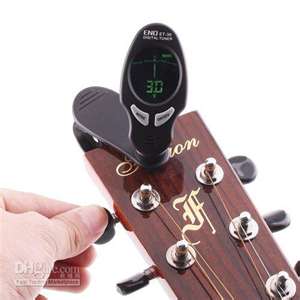 You could also get a pedal tuner. They’re great for stage work; when you’re using a PA or amp you can cut off the sound while you tune.  And the lights are so pretty.

If you sit down to play you don’t need a strap unless your guitar is heavy and wants to nose dive off your lap. (Maybe someone should make guitar whips.) If you want to stand, you’ll need a strap.

I like straps with a little grip, like leather or something woven. Nylon straps slide around on me but you may be made of tougher stuff.

All electric guitars come with a knob at each end for the strap. Just slip the hole over each knob. Adjust as necessary. Acoustic guitars don’t always have knobs. There might be one on the end opposite from the tuning pegs. You can use that then tie the strap just above the nut near the tuning pegs. Or, if there’s a knob where the neck meets the body, attach it there. If there isn’t one there, find a knowledgeable repair person to attach one. It shouldn’t cost much.

If you play an electric or an acoustic with a pick-up, you’ll need a cord. Get an insulated cord with a quarter inch phone plug at each end. If you’re scratching your head at “quarter inch phone plug,” no worries. It’s standard and what you usually find at a music store. Non-insulated cords are thin and are about the same diameter as the kind of cord that comes with your computer.  You get these at places like discount stores or Radio Shack. They never work as well.

Get one with a little length but not too much. Six to eight feet is usually good. Even though a really long one sounds like a good idea it’ll cause you sound problems in the long run.

And most importantly, get one that’ll match your outfit. Okay, maybe this is only important for me. Guys, I hope you were shielding your eyes for this part of the blog.

If you’re just starting out, get a little practice amp. Get the cheapest one, a set of earphones and wail away on that for a while. When you’re ready to move up – or when your drummer complains the guitar isn’t loud enough – take your guitar to a reputable  music store and try out some amps. See which one sounds best. If you’re a rocker you probably want a nice crunchy sound. If you’re a jazz head, a sweet undistorted sound. Remember that you can always add effects later. Also, pick it up. If you’re a 120 pounds soaking wet you’ll probably want to stay away from that 80 pound vintage tube amp. Yeah, it sounds sweet but is it worth multiple visits to the chiropractor?

If you have an acoustic guitar with a pick-up you might want to get what’s called an acoustic amp (an oxymoron, I know) although you probably need a PA. That’s a whole sound system with mikes, speakers and more, too much to get into with this little blog. 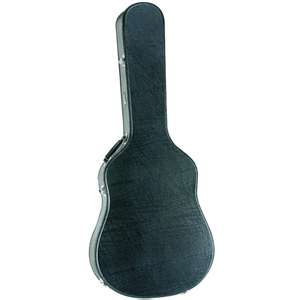 You’ll need something to carry that baby around in. A hard shell case like the one above offers the most protection but they can be heavy. If you’re only carrying your instrument to lessons or an occasional band practice, get a soft shell case (gig bag). They’re lighter and have shoulder straps.

A gig bag should have a little padding and have sturdy zippers. Prices vary greatly. I paid $50 for my last one and it works great.

Take your guitar to a reputable music store and see which case fits your needs, your budget and of course, the instrument.

If you’re traveling long distances and especially if you’re going to fly with your guitar you need a flight case. Again, too much to get into here but if you want to read about my experiences with traveling, read my earlier blog, Winning the lottery, flaming skull tattoos and flying with guitars.

If you’re gigging out or just want to leave your guitar out when you’re not playing it, you’ll need a stand. I like the kind with a tall back because my guitar is less likely to tip over. They’re harder to pack though because they don’t always fit in a bag. 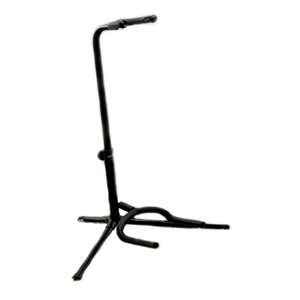 A music stand is good to have also. You could get a portable one that folds easily or a sturdier stand that’s best if left in one place. At any rate, it beats putting your music on a wobbly coffee table then trying to read it before it slides to the floor. (Then the cat gets a hold of it and it gets ugly.)

Effects, DI’s and other stuff oh my

I’ve been an acoustic player all my life so I’m certainly no expert on effects. There are a million and a half out there. If you like someone’s sound, ask them what they use. Musicians love to talk about their playing rigs.

Use the comment section below if you’ve got questions or comments. Happy playing and remember, no matter how late your gig goes, don’t sleep in your guitar case. 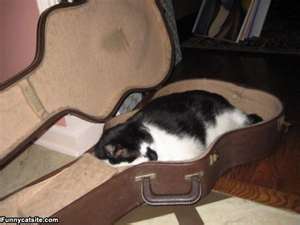 Musician - teacher - writer - gets bored easily. I write an almost-weekly blog that includes true stories gathered from 20-plus years of touring, how-to articles for musicians and profiles of performers. Also, I love dark chocolate, I can play "Brown Eyed Girl" behind my head, and I twirl the baton badly.
View all posts by jamiebobamie →
This entry was posted in Playing the guitar and tagged buying a guitar, guitar accessories, guitar capos, guitar picks, guitar strap, guitar strings, learning the guitar, music. Bookmark the permalink.

9 Responses to All dressed up and nowhere to play: accessories for your guitar