Baby, let’s drive all day – a folk singer on tour

Posted on November 1, 2013 by jamiebobamie

When Dolly Parton goes on tour, she has a deluxe tour bus, a fleet of semis, a huge crew and a full band. When I go on tour, it’s in a Toyota I pack myself. I’m not complaining — if a lot of driving and staying in ugly motel rooms allows me to perform, I’ll do it.

I’m taking you on a tour I did in September 2013, in all its glamorous detail, from great little coffeehouses in the Midwest to motel rooms with hideous carpeting. Let’s go!

It starts with packing.

When I started touring in the late 80’s, I could fill up the back of a pick-up truck. I’ve pared it down over the years. Pretty soon, I’ll be showing up at gigs with just a guitar and a change of undies.

A lot of driving is involved … which leads to the consumption of a certain beverage.

And yes, “road warrior” is hard to say, especially when caffeine-deprived.

It’s about 15 hours of driving from my home in Ottawa, Ontario to Bloomington, Indiana. After two days of boring blacktop, I played at the wonderful Blue Room House Concert series. Hosts Carolyn and Janice have been doing them for years and I always love playing there. First, there’s the wonderful and warm crowd:

Then, there’s the gifts. I was presented with this: 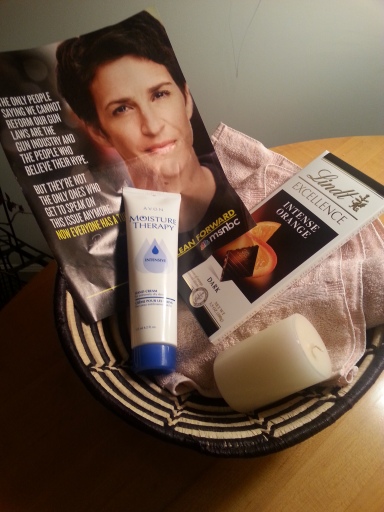 I guess Rachel couldn’t be there in person.

I spent a couple of nights in Carolyn and Janice’s comfy guest room. Such a welcome space since for the first few hours I was there, my body was still on I-69 somewhere.

My next gig was just an hour drive to Indianapolis. After meeting a friend for lunch and getting settled at her house, she took me to the venue. (Want to make a touring musician really really happy? Offer to drive her to the gig. Less time behind the wheel = more energy for the stage.) I felt just like a big star, with my name on the marquee. 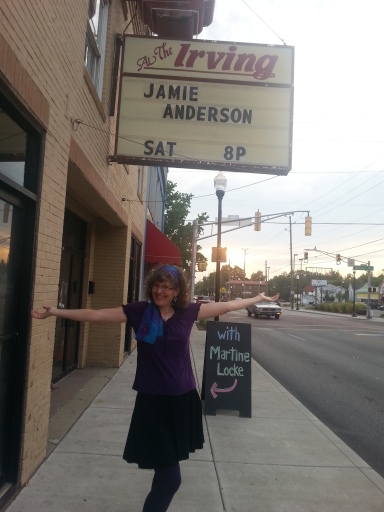 I shared the bill with Martine Locke, a red-haired Aussie with a wicked sense of humor and awesome guitar chops. Here we are on my song “Her Problem Now.”

The Irving is a cool venue. It started as a movie theater – the kind that had double feature Saturday matinees, real butter on the popcorn and velvet drapes framing the stage. In subsequent years, they stopped the movies and new owners ripped out seats and fixtures to make a punk club and now, a place that offers all kinds of music and events. It still has that funky charm.

On Sunday, I made a five hour drive to Lansing, Michigan, where I did the last show at Art Alley. I mean, the very last show – the place is closing. Fortunately, something similar will open soon.

Over the next few days, I stayed one night with a stranger who volunteered her home, one night with my aunt and uncle, two nights with friends, and one night with a couple of women I know from festivals. That last place was out in the country. Very restful. I needed it. Too much driving and sleeping in strange beds for one week.

I headed to Downers Grove, a suburb of Chicago, on Friday. After a sandwich in a sweet little café near by, I did my sound check at the Two Way Street Coffeehouse. I love this venue. Over the years, I’ve played several times in this church basement. The crowd is always warm, the coffee, hot.

I stayed with a friend that night who lives right down the street. My favorite places to stay are the ones with critters. Who needs TV when you’ve got the cat channel? All cats, all the time.

It was only a two hour drive the next day to my gig in Rockford. A gloriously sunny day, I had great radio the whole time. I always turn to the left side of the dial. I found public radio’s “Wait Wait Don’t Tell Me.” (How I’d love to be on that show. I’ve been calling their request line for over a year. Someone tell them I’m not a stalker.)

I’ve played at the Rockford venue several times before so I was expecting a good-sized crowd. It was not to be, though. Maybe because it was their first concert after a summer hiatus, or maybe it wasn’t promoted well, I’m not sure. At any rate, I enjoyed playing for the ones who showed. Sometimes it’s not all about size.

The motel room was … interesting:

The next day, I had another short drive, this time to Normal, Illinois. <insert joke here> I played a cozy house concert. “Cozy” is code for “small.” The women were nice though, so it was fun to hang out afterwards. Also, there were hot and cold running cats. Bonus.

I stayed with friends after that, in their comfy home in rural Indiana, surrounded by farmland. Nice to take a long walk each day, with only the music of the rustling crops, and hang out with my buddies. One of them got me hooked on Orange is the New Black. Damn her. Now I’m going to have to get Netflicks at home.

Usually, when I have a break between gigs, I turn to writing. I write bios and press releases for musicians. (Want to hire me? Contact me.) However, my laptop was infected with an evil virus that made getting on line nearly impossible. My phone was great for checking email. However, thumb typing a 500 word bio was not an option. Here at housing in rural Indiana, though, I was able to get a connection with my computer. I felt like I’d won the lottery, or Rachel Maddow had agreed to marry me. I spent one day cranking out a bio and a press release for a couple of clients. The next day, I woke up bright and early, thinking I could squeeze in a blog post before I hit the road. This time, their WiFi decided to putz out. Ah well, I’m already married. Sorry, Rachel.

Columbus, Ohio was next, and I was excited to play at the Ohio Lesbian Festival with my band – Rachel Alexander on cello, Tory Trujillo on vocals and Wahru Cleveland on drum. After a raucous rehearsal on Friday, we were ready. The performance on Saturday night was the most fun a person could have with their clothes on.

Beverly McClellan was also performing that night. She was on the first season of The Voice. She should’ve won. Amazing voice, endless energy and fun to hang with. She complimented me on my mandolin playing, and then told me she loved folk music. When she was a kid, she had a chance to sing with Elizabeth Cotten. How cool is that? Here she is with musician Nedra Johnson and stage manager Cynthia. Cynthia had a little issue with her pants. (Beverly’s the one making the peace sign.)

It’s so important to have good sound. I could be Lady Gaga up there and no one would know. Engineer Karen Kane is one of the best.

Damn, I forgot the meat dress.

At first, I thought my motel room was pretty good.

It was later that I realized it was next door to a “gentlemen’s bar.” I also found condoms in the desk drawer. They were new but still … ew. For two days, the WiFi was on the blink and for a working musician, that’s tough.  I complained to the hotel headquarters about all that after I got home and received a voice mail from the manager, asking me to call him back. Uh, dude, you called Canada and I am not spending money to return your call and explain further why I’ll never stay at your esteemed establishment again.

At least the room was inexpensive and close to the festival. I have to watch my pennies on tour. In three weeks, I spent about $400 on gas, and $200 on food. I stay with friends and in community housing whenever I can. I buy groceries and cook if I’m in one place more than a night. Still, I never know if I’m going to come home with $500 or $5000. On this tour, income from gigs fluctuated wildly, from less than a hundred at a couple of small gigs, to a decent guarantee at a couple more. I still made money on this tour. Good because now I can pay some bills. Bad because it’ll only encourage me.

Soon, it was time to head home. After a two-day drive, it was more than awesome to sleep in my own bed. Vito has decided he never wants me to leave again.

Want more road stories? My memoir, Drive All Night, is out now. Get it at Bella Books.

Musician - teacher - writer - gets bored easily. I write an almost-weekly blog that includes true stories gathered from 20-plus years of touring, how-to articles for musicians and profiles of performers. Also, I love dark chocolate, I can play "Brown Eyed Girl" behind my head, and I twirl the baton badly.
View all posts by jamiebobamie →
This entry was posted in Music business, Stories from the road, Women's Music and tagged Jamie Anderson tour stories, Jamie Anderson touring, music, Ohio Lesbian Festival, tour stories, Two Way Street Coffeehouse. Bookmark the permalink.

4 Responses to Baby, let’s drive all day – a folk singer on tour