Posted on September 6, 2019 by jamiebobamie 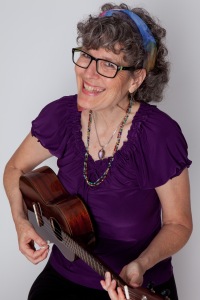 When I first got the day hospice gig, I envisioned beds filled with weak looking people, surrounded by solemn loved ones, my soothing music helping them rest. Turns out they’d rather hear “Ob-la-di, Ob-la-da” or “Wagon Wheel.” I play in a comfortable living room. Not a bed in sight. There’s usually a raucous card game going on as a volunteer pushes a cart with snacks and juice served in elegant wine glasses.

I always look for Andrew* when I arrive for my shift. A middle-aged guy in casual clothes, brown hair carefully combed to the side, he was thin and moving slowly when I first met him a year ago. Even though he kids me about the ukulele I’ve caught him tapping his foot while I played. Turns out he just likes to hassle me since he plays a “superior” instrument, the guitar.

After being away for the summer I came in for my shift. I moved a chair, unfolded the music stand and pulled the ukulele out of the case. While I tuned I looked around for Andrew. I didn’t see him and my first thought was, Did he pass? I always wonder that when I see someone one week and not the next. It could simply be that they recovered or went to another hospice, however, it could be the inevitable. Fifteen minutes passed before Andrew strolled into the room with an energetic step. He looked better than that first time, his color robust, so my thoughts switched to something more positive – maybe he was recovering?

I don’t know anything about Andrew’s health. We aren’t allowed to ask why the clients are there unless they bring it up, we only provide art projects, card games, food, massage, and music. I’m usually background music to a decibel busting card game. Someone plays a good hand and they all scream with laughter, then point fingers at Andrew, accusing him of having cards up his sleeve. I don’t care that they find poker more interesting than my music. They’re there to enjoy themselves and perhaps forget about hospitals and what their last test revealed. Once in a while I see a foot tapping or lips moving to the lyrics, maybe a smile or a nod my way. Sometimes they clap. Usually they don’t. They don’t know I’ve been touring over thirty years or that I have eleven albums. It doesn’t matter.

Andrew told me he likes Credence Clearwater Revival so one week I brought in songs for him. Partway through “Bad Moon Rising” I realized what a poor choice it was: “I hear hurricanes a-blowing/I know the end is coming soon/I fear rivers over flowing/I hear the voice of rage and ruin.” I switched to “Down on the Corner.” An upbeat song about buskers was much better.

One week I brought the guitar. Andrew grinned and commented, “You brought the big boy!” “Big girl” I corrected and we laughed.

I’m bad at names. I remember Andrew because he’s there every time. He doesn’t recall my name and sometimes he looks confused when I bring up his guitar playing, like he can’t fathom how I know he plays. Some weeks we’ve had conversations about kinds of music and guitars but his meds probably scramble his brain. As long as he enjoys our talks in the moment, it’s good.

Andrew’s not the only regular client and there are some I only see once. One day an elderly gentleman slowly lowered himself into a recliner near me. A volunteer covered his lap with a blanket. He confided that he couldn’t sing or remember the words to anything. I assured him that I didn’t care. When I got to the chorus of “Brown Eyed Girl” I invited him to sing along. He softly sang in a creaky voice, “La-la-la la-la-la-la …”  “See, you can remember the words!” I complimented. A smile lit up his face.

One of the clients is a young woman in her thirties. She wears a turban and sits next to to a tank of oxygen.  As I was packing up one day she smiled and commented that she liked those old songs. Old songs? Did she not hear me play “Riptide?” Okay, one song out of thirty that was written after 1980 does not count, especially when you’re her age. I had to give my musician’s ego a firm “down girl.”

I was strumming a rhythmic song one day and looked up to see a thin woman, half her jaw missing but still smiling and bouncing up and down. “I love that song” she exclaimed after I was done, telling me how much she loves that band. “Do you know anything else by them?” I didn’t but she was happy to boogie along to the next song I did. I only saw her that one time.

The volunteers are sweet. Most are older women. They sit near clients, talking or getting them something to drink. One gives them hand massages. One, in her eighties, is usually dressed in pastels, her white hair carefully curled. She claps to my faster songs, usually off beat. She sings, even though she doesn’t always know the words.

Because the clients are pretty mobile and only there for the day, I didn’t think that anyone actually went there to die, like it was Hospice Light. We just get them out of their house, give their caretakers a break, and offer social time and something to do. However, one day one of the volunteers leaned down to me between songs and quietly said, “A client passed in one of the back rooms. He’ll be wheeled down the hallway and when that happens there’s a moment of silence.” I’d almost forgotten until a few minutes later she said softly, “It’s time.” I’d been singing Leonard Cohen’s “Hallelujah.” I stopped. We all turned toward the hall as a group of people, heads bowed, pushed a covered gurney slowly by. A minute later, the raucous card game resumed and I finished “Hallelujah,” fighting the tears.

Musicians, if you’re looking for a great volunteer gig, consider playing at a hospital or a hospice. You don’t have to be a harpist warbling hymns. Clients may prefer “Rock You Like a Hurricane” to “Amazing Grace.”

*The names and some of the details have been changed.

Musician - teacher - writer - gets bored easily. I write an almost-weekly blog that includes true stories gathered from 20-plus years of touring, how-to articles for musicians and profiles of performers. Also, I love dark chocolate, I can play "Brown Eyed Girl" behind my head, and I twirl the baton badly.
View all posts by jamiebobamie →
This entry was posted in music, Playing the guitar, Playing the ukulele and tagged music at hospice, volunteer musician. Bookmark the permalink.