Through rain, through sleet, through smoking monitors 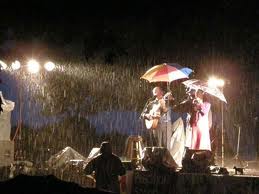 I looked out from back stage and frowned at the black clouds hanging low in the sky. The act currently performing was pushed back under a cover, first from the sheets of water, then hail. I was next. I stepped on stage because we musicians are like the post office and short of a tornado we’re always out there. Just call me Dorothy.

As lightning repeatedly flashed I turned to the festival organizer and shouted (to be heard over the rat-a-tat-tat of hail), “You’re going to shut down the stage, right?” He smiled, shook his head and replied, “We never stop the festival.” I turned to Dave Nachmanoff, my side player, and mumbled, “I think we’re going to die out there.”

Fortunately, we didn’t.  The sound techs scrambled around to set us up as far under the stage cover as they could. A mist still reached us, making my guitar strings feel sticky but it was nothing compared to the vats of water sloshing down on the audience. We started our first song facing rows of empty wet chairs topped by an angry gray and black sky. The chairs closest to us had a short row of lumpy colored plastic. After we finished that song, a couple of arms shot out from the shapes and we heard a muffled “Yay Jamie! Yay Dave!” Then the body parts would retract in, like a line of turtles into their shells.

The water continued to stream down until it turned to a light sprinkle halfway through our set. It stopped just as we did the last song. We saw heads and legs appear from under the row of colorful rain ponchos and tarps in the front row; we also noticed a few people a hundred or so yards away, huddled under craft vendors’ tents.

I played at another festival in New England where there was frost on the ground in the early morning. At the time I lived in Arizona and anything colder than 60 F was winter to me. Thankfully, the moisture that fell from the sky was only rain but at those temperatures it might as well have been snow.

The stage was rescheduled several times to accommodate the tumultuous weather. When the clouds parted long enough for a show I realized that I couldn’t strum my guitar with fingers stiff from cold. My friend Sue Fink shared the set with me. I’d do a song then rush off the stage to be wrapped in a blanket. A kind stage tech would hand me a hot cup of water to hold while Sue did her song. Then it was her turn to dash off stage and take my place. We went back and forth like that for our whole show.

Pools of water had collected on stage. I was told not to touch the mike stands; I tried not to think about my guitar with metal strings, plugged into an amp. I was fine until the monitor (stage speaker) in front of me started sparking, then smoking. It was oddly appropriate at first, given that I was in the middle of “Dark Chocolate,” a song about lust. However, I prefer to die peacefully in my sleep when I’m 105, not at 32 in a stage fire so I said casually into the mike, “I think the monitor is smoking.” I strummed a chord and paused, stepping back as three of the stage crew frantically moved the speaker and swept water off the stage.  I hope they were wearing rubber soled boots.

We finished the set.

Now I understand why rock bands use smoke machines although I’m not sure a folksinger needs quite that much excitement.

I was on stage once with several other performers at a festival in southern Florida when suddenly the sky opened up. The audience rushed for the stage, the only covered spot within a hundred yards. As we stood there, elbow to elbow in that tiny space, I thought someone should continue entertaining so I grabbed my mandolin. I launched into the first upbeat song that came into my mind, inviting them to sing along. Half hearted smiles greeted me. I was in the wrong part of the country to do a song called “Hurricane,” especially during a thunderstorm.

One summer I played at nine festivals. It rained at almost every one. It got to where I was joking with festival organizers not to book me.

Years ago, at the Michigan Women’s Music Festival, I sat in the audience as Robin Flower’s band ripped through a lightning fast bluegrass song while real bolts of fire shot across the sky. Just to my left the stories-high sound tower swayed slightly in the wind. A crew ran up to each side of the stage and put tarps over the speaker stacks as rain started to pummel us. Audience members shrieked as they covered their heads and dashed from the area. I stayed put. Robin is one of my favorite performers and there was no way I was missing her. The fact that I was in the middle of field during a raging storm didn’t faze me. Much.

They had to quit soon though. The potential to die always trumps live music, even if it’s damn good bluegrass.

The photo above is of Larry Murante performing under less-than-stellar circumstances.

This post was prompted by the recent tragedy at Bluesfest here in Ottawa. A stage collapsed in a storm just minutes after a band left the stage. Unfortunately, several people were injured although no one was killed. Please send good thoughts their way.

Musician - teacher - writer - gets bored easily. I write an almost-weekly blog that includes true stories gathered from 20-plus years of touring, how-to articles for musicians and profiles of performers. Also, I love dark chocolate, I can play "Brown Eyed Girl" behind my head, and I twirl the baton badly.
View all posts by jamiebobamie →
This entry was posted in Stories from the road and tagged bad weather at music festivals, Jamie Anderson tour stories, Jamie Anderson touring, life of a musician, life of a touring performer, michigan women's music festival, music, music festival in the rain, tour stories. Bookmark the permalink.

2 Responses to Through rain, through sleet, through smoking monitors