Because I write a lot about women’s music, I get questions about musicians that usually start with, “What ever happened to ________, uh, she’s not dead, is she?” So, when I asked Dianne Davidson to do a show with me last summer in North Carolina, I thought it’d be fun to call it “We aren’t dead yet.” She had recently moved to the triangle area (where I wanted to play) so I knew she was still breathing, I just wasn’t sure she was still playing. As it turned out, she’d been sidelined by a couple of auto accidents; she was also taking time off to raise her son. She took a day or two to decide, then said yes.  We thought we’d invite Deidre McCalla because she lives in Atlanta, an eight hour drive away. And while she wasn’t retired, she hadn’t been performing much. Since splitting a bill three ways meant we were each going to make a dollar fifty, I wasn’t sure she’d say yes but we got an enthusiastic affirmative from her. We were off to the races.

You may be scratching your heads about now and wondering who are these women and why should you care if they’re breathing? Dianne got her first recording contract when she was just a teenager. In addition to her solo albums, she worked with people such as Linda Ronstadt, then in the eighties, she recorded for Olivia, the biggest women’s music record label. Deidre’s done music for a long time too, recording three albums for Olivia plus one on her own label. Both Deidre and Dianne have played in a ton of venues, from coffeehouses to Carnegie Hall. And me? I’m some hack who slipped into women’s music in the late eighties. I used to go to their concerts so it was with wonderment that I found myself on stage with these two in Carrboro, NC last May. Holy crap was it fun. The place was packed, some who’d come from out of town. The energy was high, like the old days of women’s music. Not only were we not dead, our audience was very much alive, too.

Many who couldn’t come to this show asked when we’d come to their town. We got requests from California, Tennessee, Mars … so we started thinking, maybe we could expand next year. California wasn’t affordable but Tennessee was doable – Dianne’s from there and knew some places we could play. Deidre could produce our show in Atlanta. And my dad’s got a barn … I could get the same venue in North Carolina. Not a barn.

There was some uncertainty about logistics. It would involve a lot of driving. Back when we were all touring full time, it was nothing to drive six hours, hop up on stage and do it again the next day. Not so much for three middle-aged broads who consider driving across town worth a nap. Also, Dianne’s health had its iffy moments and a week before leaving, a doctor told me I’d broken my right foot. Dianne’s a trooper, though, and I found out the day before I was supposed to leave that I only had an abnormality – like I needed three doctors to tell me I was abnormal – and told I could take off the cast.

The shows were on, baby.

Goofing off before the show.

We met at the ArtsCenter in Carrboro, NC on June 20, 2015 – Dianne with some of the sound equipment, Deidre with the rest and me, with two mikes and a tiny amp that Dianne made endless fun of. (I purposely ended with a preposition so she can bug me about that too. Love you, Dianne.) As our dedicated volunteers arranged chairs and tables, we set up the equipment and before we knew it, our audience started arriving.

We set up round robin style, with all of us on stage together. We took turns singing two songs apiece. Sometimes we joined each other on songs, like Dianne’s version of “Delta Dawn.” (Did you know she was the first person to record that song?) Deidre asked her fans earlier in the week what songs she should do. She tried to bar Dianne and me from requests. Ask her how well that worked.

I was the comedic relief, with songs like “Menopause Mambo” but truthfully, Dianne and Deidre can hold their own when it comes to funny stories and song intros.

There was a lot of love and respect on that stage. When Deidre was singing, I’d look over at Dianne. Her eyes would be closed, a contented smile settled on her face. When Dianne sang “Tonight I’ll Dream That You Care,” I felt tears sting my eyelids. Such a beautifully written song about a place where we’ve all been at some time in our life. Dianne never fully recovered from the car accidents so she’s in pain all the time. When she sang, though, it was as if it melted away. Music is at her core. It’s true for Deidre and me, too.

Deidre did my favorites, from the up tempo “Girl You Don’t Know” to the gorgeous ballad “Cradled in Green.” Dianne offered a variety too, from a heartbreakingly beautiful new song she’d written for a rock opera, to the take-no-prisoners Willie Dixon number “Built for Comfort.” Yours truly played lead guitar on that one and received applause. I felt just like Eric Clapton. (Last year I bellydanced during that song. I’ll bet Clapton can’t do that.)

We ended with “The Road I Took to You,” a Barbara Keith song recorded by Meg Christian back in the day. I love its uplifting message. There were three verses, so we each took one and then sang together in harmony on the choruses. As the audience leapt to their feet, Deidre and I stood to either side of Dianne. Dianne joked about not getting up and would they like another song? Hell yes. We sang “Goodnight Irene” in three part harmony, to honor Ronnie Gilbert. Everyone sang with us. A perfect ending. 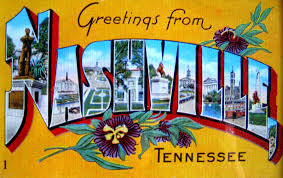 It wasn’t the end, though. The next week, we journeyed to Nashville. I asked Dianne ahead of time about what kind of crowd to expect. She grinned and said she recognized everyone on the reservation list. Her hometown of Camden is about ninety miles west of Nashville — many had driven in for the show –and Nashville is the place where she made a lot of music over the years.

I spoke with Dianne before the show at the Douglas Corner Café that night, June 26. She started pointing out folks in the crowd. “See that guy over there? He and I were in a band when I was eleven.” Eleven. At that tender age I was learning “Little Bunny Foo Foo” at Girl Scout camp.

The sold-out crowd quieted as we began the show with “Going to the Chapel.” The landmark Supreme Court ruling on same-sex marriage had been made just that morning. What better way to celebrate? We continued with a similar show to the week before. Instead of one of my songs, I read a chapter from my book, this one with ties to Nashville, “Don’t Stand Too Close to the Bird.” It ends with “I got booed at the Bluebird and still made a hundred bucks.” You’ll have to read the book if you want to know the rest.

Dianne invited former bandmates Joyce Wydner and Michael Mishaw on stage for one song. Even though they hadn’t sung together for many years, the harmony was so warm and beautiful that I almost forgot to get back on stage for the rest of the show.

We ended with the same two songs we’d done in Carrboro, the audience giving us a standing ovation. When I left, Dianne was still sitting on stage with a radiant grin on her face, a line of friends and fans waiting to talk with her.

The next morning came way too early. With echoes of the night before running a happy movie through my brain, I pointed my car south to Atlanta. My good spirits didn’t last long. I wish someone had told me it was National Interstate Construction Day. I could’ve walked faster. Backwards. Wearing concrete. I felt like I actually had by the time I pulled into town. At least I had an hour at a friend’s house to put up my feet. Dianne pulled in behind me at the venue without even having time to stop at her hotel. Deidre wasn’t far behind. 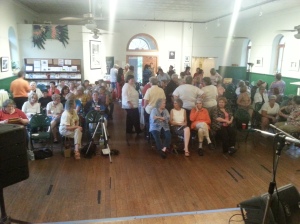 Atlanta crowd getting settled in

We sleepwalked through set-up but had some time to chill out a bit before the show. I’m speaking only for Dianne and I – Deidre was producing the concert so she was a blur with a clipboard. She even went to get us dinner. I’m pretty sure we owe her about $40,000 for the show. 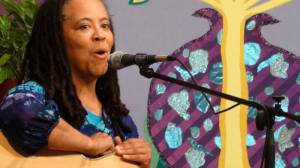 It was another fun concert. A lot of the crowd was from the Atlanta Women’s Chorus so our singalongs had fifty part harmony. They laughed in the right places, got teary eyed in others. When I started “Dark Chocolate,” someone cheered especially loud and I joked, “Oh good, a fan. Always bring a fan.”

I fully planned to talk more about the details of the shows but I’ve already gone on and on, so I’ll end simply with “you should’ve been there.” I’ll post video soon. Maybe next year, you can make it to one of our shows. Let’s all keep breathing.

Did you enjoy this post? Please consider making a $2 donation to help keep me in coffee and my cats in kibble. Merci y’all.

Want to know more about our music?

Musician - teacher - writer - gets bored easily. I write an almost-weekly blog that includes true stories gathered from 20-plus years of touring, how-to articles for musicians and profiles of performers. Also, I love dark chocolate, I can play "Brown Eyed Girl" behind my head, and I twirl the baton badly.
View all posts by jamiebobamie →
This entry was posted in LGBT music, Stories from the road, Women's Music and tagged Deidre McCalla, Dianne Davidson, music, we aren't dead yet, we aren't dead yet show, womens music. Bookmark the permalink.